As China’s new leadership takes the reins in 2013, they must steer China from an investment economy to a consumption and services economy over the next decade. This path is not uncharted. Successful emerging economies, like South Korea and Taiwan in the 1980s and Japan in the 1950s, have traversed its rocky terrain.

Although there are few reasons to believe that China will be unsuccessful, it is the largest economy ever to make this transition. The challenges for China are many and substantive as it marches forward into this historic shift. 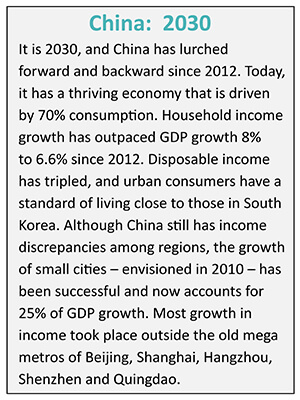 Although not exhaustive, here are eight critical issues the Middle Kingdom must navigate successfully to maintain economic growth momentum and social stability:

China will grow old before it gets rich. Demographics are destiny, and this fact will have profound social and financial consequences. By 2020, over one-third of Shanghai’s population will be over 60. The one child policy, still in effect, means China will have the “4-2-1” Problem: one child responsible for two parents and four grandparents. There are fewer extended families, and the government pension system set up in 2000 is already underfunded.

Economic growth will naturally slow as China shifts to a consumption and services economy. The government will have to make very difficult choices on what to spend the money on as they cope with this abrupt aging of society. Table 1, comparing aging in China and America, highlights the differences between the two top economies in the world over the next 30 years. 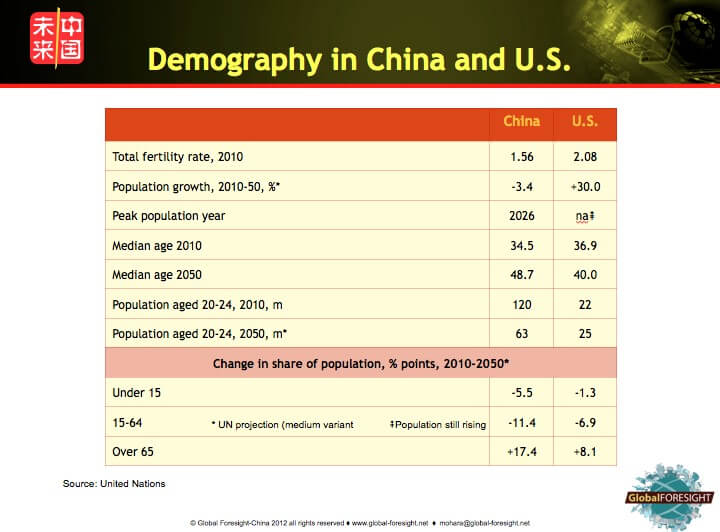 China as been an investment-led economy since the 1990s, composed of government spending with corporate investment coming mainly from state-owned enterprises. Over the last 20 years, investment by the government has driven down consumption as a percent of GDP from 70% to 57%. To drive consumption, household income must rise.

This will come from increases in wages that demand policy changes, expansion of private sector activity, and financial reforms. There is upward pressure on wages in the market from declining labor pools. Supply and demand are working in the right direction to achieve this. Although this still seems daunting, it is the vision of the central government, which is clearly committed to driving towards 70% GDP by consumption by 2030.

Critical to the shift to consumption is increasing competition in sectors heretofore closed by government. Private sector ownership and investment in sectors including telecommunications, transportation, healthcare, and infrastructure, is essential in this transition. None of this will be easy given the legacy of government monopoly, and it can only be done with a shift from state-owned enterprises to the private sector with all the invested interests of key party, military and government leaders.

The Chinese are big savers: 42% of their income is held aside to hedge against concerns of rising healthcare, education, and retirement costs. Consumers need to feel confident that wage gains are sustainable and that they need not save so much. They need to see more good jobs created, particularly for the legions of young people graduating college. They need to see a better social safety net, particularly for healthcare and pensions. They need to see better regulation of housing in terms of the supply of affordable housing, property prices, and appreciation of the renminbi.

Expect a lot of volatility of consumer confidence and spending over the next 10 years as the government vacillates between reform and resorting to government-led investment to maintain growth and stability. There will be a gradual decrease in the savings rate and an increase in consumer spending.

China has seen a slowing of employment growth, which is a huge challenge to overcome. Reversal of this trend demands a shift to a services economy. This will drive growth in SMEs in service of domestic needs instead of export needs. China’s export-dependent manufacturing economy did create SMEs, but employment in that sector is being replaced by mechanization.

Opening up more sectors to private investment and ownership is critical, as is financial reform to provide credit to SMEs. What makes this shift even more challenging is the decline in the workforce due to the one child policy.

China is plagued with a lot of redundant labor in the state-owned enterprises, which have very low productivity. Concurrently, it has a huge bureaucratic government that is inefficient and lowers productivity in both the private and public sectors. Further still, the agricultural sector is plagued by poor productivity as a result of under- mechanization, fragmentation, and too many small farms.

Government has a huge role to play by incentivizing productivity through initiatives that increase mechanization and optimize the structure of government & industries. This entails risking some social instability as government downsizes and rural labor is reduced.

There is far too much government control in the financial sector, and this is incompatible with a shift to a consumption and services economy. There needs to be competition among banks through deregulation of interest rates. This would allow increases in deposit rates and varying loan rates for both business and consumer borrowers. There needs to be aggressive policies and incentives to provide credit to SMEs that are focused on the domestic market. This is critical to developing a healthier job creation environment in China.

Chinese consumers currently feel compelled to save as much money as possible because of the lack of a social safety net in healthcare, social security and education. What is currently in place is unevenly distributed and poorly managed. However, providing a safety net for such a large population is a daunting and long-term effort that will continue to be a brake on increasing consumer spending. The loss of an extended family in China further exacerbates low consumer confidence.

This all will take time to sort out. Until the Chinese feel more confident that the government will continue to improve the social safety net and extend it to more people, this remains a significant impediment to the transition from an investment to a consumption economy.

Despite these and other challenges, China has begun its historic shift to a consumption- and service-driven economy. This is a long-term endeavor that will slowly unfold over the next 20 years – with many lurches forward and backward – as China will be forced to maintain social stability with increased investment from time to time.

China’s economy moves forward on the momentum of the successes of its investment policies over the last 20 years. It is approaching the point where it needs to change to continue its long march to the world’s number one economy. This creates many new opportunities not just for Chinese entrepreneurs and companies but a new strategic and business environment for foreign companies both large and small.