Beginning in 1978, China began its transition to a market-oriented economy and launched a period of rapid and powerful economic growth.

As Western cultures seek out opportunity in China, it is important that we understand one fundamental principle: American and Chinese cultures are polar opposites. They think, perceive, manage, communicate, and share information in ways that are diametrically opposed.

To understand Chinese culture at a glance takes more than one glance. There are five different cultural lenses through which one can look at cultures in order to gain a deeper understanding of them: 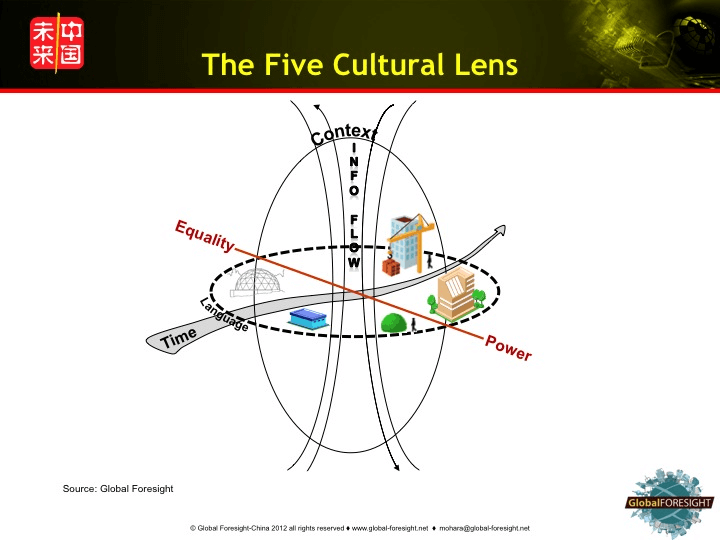 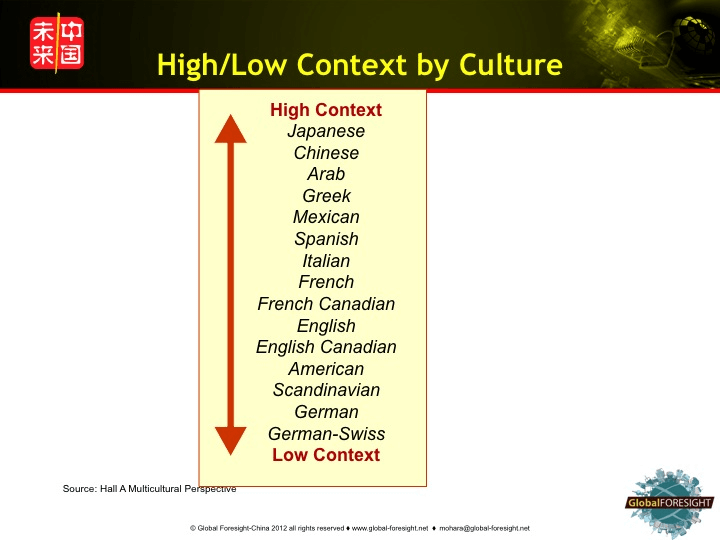 A monochronic-oriented culture perceives time as linear and structured. It is a construct that moves on one plane, in one direction. In cultures like the US, time is to be scheduled, managed, organized and accounted for. In cultures with a polychromic orientation, time consists of many events occurring at the same time with many people. It is not linear, but rather a state of being. Polychronic cultures, like China, focus less on the precision and accounting of time than on relationships and traditions. The time dimension in culture also includes where the focus of time lies — past, present, or future.

The expectations surrounding power distance further highlight the polarity of American and Chinese cultures when it comes to relationships. China is a high-distance culture; relationships are hierarchical in terms of where you fit along a number of dimensions such as age, political status, title, wealth, and so on. People are aware of where they are in the hierarchy and are very much sensitive to it. They are disciplined in thinking, exhibiting behaviors, and making decisions in relation to where they are in the hierarchy, as well as where others they are interacting with are. On Hofstede’s Power Distance Index, China scores an 80, indicating the high power distance.

At the other pole is the United States with the expectation of egalitarianism. There is no formalized hierarchical structure in community and social relationships. In contrast to China’s score of 80, the US scores 40 on Hofstede’s Index.

The preference for how, when, with whom, and by whom information is shared is a vital element in understanding various cultures. Americans tend to prefer a direct flow of information. It travels from Point A to Point B to Point C in an orderly fashion, much in keeping with our mono-chronic, linear orientation. In Chinese culture, there is a sea of information, flowing freely and continuously through relationships. It organizes and reorganizes, depending on what the current situation is and participants in the flow.

Language is the most powerful, exquisite, and defining cultural dimension. How we acquire, practice, and share language is an integral component of identity. Chinese language is tonal and comprised of characters. Learning the language is accomplished by memorizing characters. In the US, language is based on Western symbols, on the alphabet. One acquires language contextually and builds understanding via multiple channels.

When working cross-culturally, it is essential to recognize that the more opposite one is to a culture, the more one’s automatic responses and intuition about what to say, what to do, and how to be, do not work – thus the greater the risk for cultural conflict. When working with the Chinese, it is imperative that we understand that we are polar opposites culturally.

Becoming competent working within that cultural understanding is the first and most important step in building and strengthening productive cross-cultural business relationships. Nowhere is this more important than in China, where the cultures are so different along every dimension.
Mary O'Hara-Devereaux2020-08-21T00:04:28+00:00May 8th, 2013|Future of China|