While these age groups have been fraught with social changes over the past century, they also share values deeply rooted in China’s ancient culture of Confucianism and Daoism. As China moved from a closed to a more open society, our understanding of each of its five generations has improved exponentially.

Although all the generations have been shaped by six big social shifts, it is important to watch and understand the innovators within each who have shaped China’s future through their social and economic leadership; they provide a microcosm of the complexities of this rapidly evolving society.

For most urban Chinese, the next 10 years will revolve around two questions:

Urbanization drives lifestyle change as new social groups form, bringing more diverse people together than is possible in traditional village life. As migrants pour into the new cities China is constructing, many challenges will arise.

“People resemble their times more than their parents” 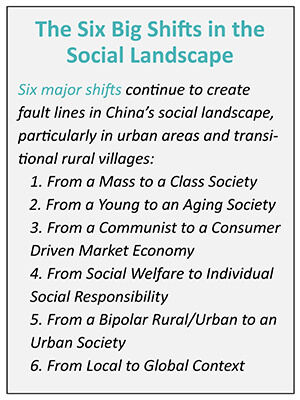 Generations in any culture are defined by the times and tastes. Because they share a place in history whose defining moments indelibly capture their attention and emotions, its members have a unique personality that lasts a lifetime. With first job experiences placing a close second, most generations are shaped by early family life and defining events experienced during teenage years — events like the Founding of the Chinese Communist Party in 1921, the Japanese Invasion and Occupation 1931-1945, the Founding of the Peoples Republic of China 1948, the Cultural Revolution 1966-1976, and Deng Xiaopeng’s rise to power in China in the 1980s.

More recent events continue to shape the ‘Me’ Generation (Millenials/Gen Ys) whose second cohort is still just 13 to 21 years of age. The astounding rapid economic growth of China to the world’s second largest economy, the diffusion of cell phones, manned space flight, the rise of social media… these and other events create certain beliefs, values, and guiding principles that are collectively shared by their generational cohorts and continuously impact them over their lifetimes.

The massive shifts still underway in China will cause most of its generations to undergo significant changes of values and beliefs and create many divergent lifestyles over the next 20 years. Because of the continuous wave of great events over the last 60 years, China’s generational cohorts are distinct about every 10-15 years.

Global Foresight’s Chinese Generation’s research began in the mid 1990’s and continues today as the ‘Me’ Generation matures and the next generation, now approaching 12 years of age, is emerging. In these articles we describe the five separate generations in China spanning 12 to 93 years of age. The Generations are:

These descriptions provide a baseline of who the Chinese people are today and what has shaped their values and behaviors heretofore. We describe emerging urban lifestyles (rural are quite different) in each generation through our studies of its respective innovators, selecting those characteristics we forecast will diffuse throughout each of the generations and differentiate them in five to ten years. 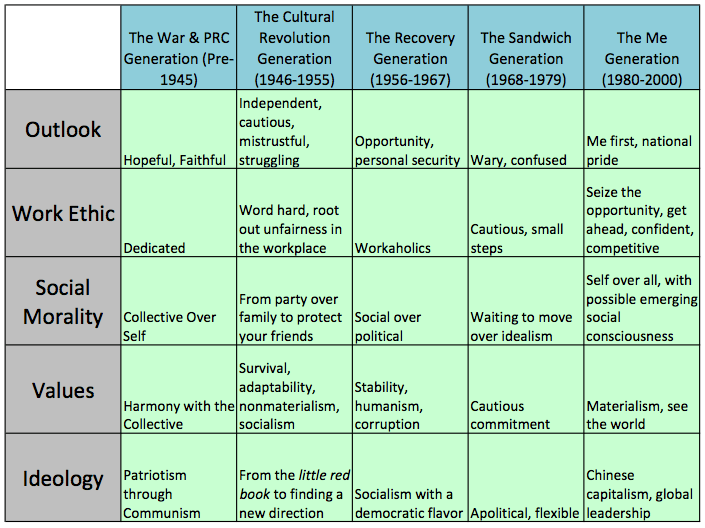