China has experienced over three decades of unprecedented and rapid growth. Despite remarkable economic changes, ancient philosophies and behaviors continue to underpin daily Chinese culture. These deeply held traditions and beliefs are the main foundations of work, life, and relationships in China.

Two philosophies, Confucianism and Taoism, and two behaviors, Face and Guanxi, have profound influence on Chinese culture. The former will be discussed here:

The essence of this centuries-old philosophy is harmony and drives much of the behavior – both conscious and unconscious – of the Chinese culture. Confucius’ teachings emphasized the importance of society, of the group. The good of all is more important than the good of one, which is antithetical to American culture. This belief creates a system of behavior and thought around hierarchical systems. These are of tremendous importance; people are very much aware of relationships with others in terms of age, of status, of prestige and standing, and they evaluate and understand these factors when deciding how to behave and how to think about certain situations. 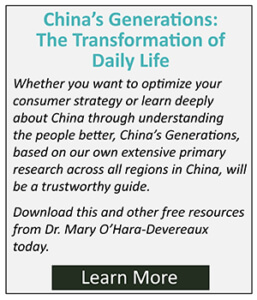 Of central importance is continually striving to be modest and to live in moderation. The idea that one should stand out in a crowd is counter to Confucianism. The desire to bring pride to one’s family or group drives this behavior. Righteousness and filial piety have been, and continue to be, integral to Chinese culture. Behaviors, again, are driven by the value placed on the collective rather than the individual. The ethics of Chinese culture stress the importance of being loyal to one’s true nature, one’s beliefs, and one’s upbringing.

It is important to recognize that Chinese culture is risk averse and exhibits avoidance of confrontation. This does not indicate, however, that they are “risk averse” in an American sense of the term. Rather, they seek to avoid confrontation; they do not want to risk relationships by having conflict. For the Chinese, there is much risk in displaying excess or direct emotion, and this is what is to be avoided.

Whether you are negotiating, building an organization, building a team, hiring employees, or working with suppliers, it is critical that you recognize that underpinning the relationships and decisions of Chinese counterparts is Confucianism. Understanding and accepting this will allow greater insight into behaviors and facilitates more effective interactions.

If Confucianism is the yin, Taoism is the yang. Taoist philosophy focuses more closely on behavior and on strategies and tactics for surviving and thriving as a human being. Flexibility exists within the individual to act strategically and to employ various tactics in order to accomplish a task. There is one area, however, that is not malleable: non-intervention in the natural course. Barring that, strategic behavior is an essential element of life. One of the most difficult aspects for those from other cultures to adapt to is the realization that every relationship is strategic.

In Chinese culture, life is viewed holistically, and there is great emphasis on balance, integration, and harmony. In order to achieve this balance, there needs to be inter-dependency among opposites. That is why there is no “either/or.” Rather there is “both/and.” Culturally, Chinese can hold one act in opposite ways because of the Taoist tradition and continued influence of the philosophy. This is often seen in negotiations where you might get a ‘yes’ one week and a ‘no’ or significant change the next week. In China, all things are conditional and depend on ‘circumstances’ which can include a change in politics, a new boss, new information, or a better deal.

Confucianism and Taoism are the two main philosophical underpinnings of Chinese culture. It is difficult initially to understand and accept because it is counter to American culture. Doing so, though, is crucial so that we are more aware of and watchful for behaviors. In seeking to understand various behaviors and experiences, it is wise to go back to the roots of Chinese culture: Confucianism or Taoism. Is there something within these philosophies that can help bring greater understanding to the situations you are experiencing as you interact within the Chinese culture?